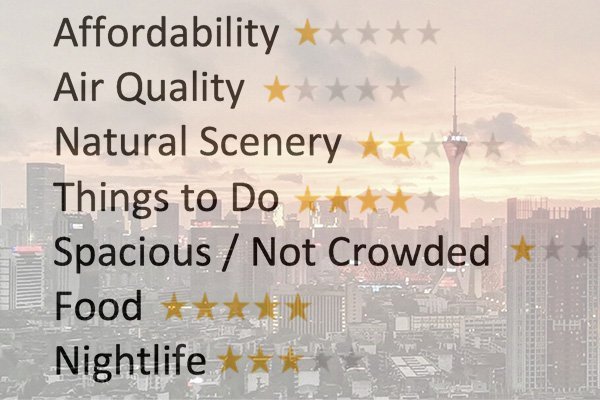 Are you interested to learn Chinese in China, but you’re not sure which city to study in? Take a look at our ranking of the 10 best cities to learn Chinese, which are all homes to great Chinese language schools. It can be overwhelming with the amount of choices, so we’ll try to help you pick the best one. Not only is it important to study hard to reach your language learning goals, but also to make the most of your China experience when classes are over. We’ve ranked these cities based on factors such as air quality, the cost of living, crowds, scenery, food, and fun to help study abroad students (or teachers) make an informed decision. Choose carefully!

LIST OF 10 BEST CITIES TO LEARN CHINESE IN CHINA

Capital and National Standard for Chinese

Beijing is a must-visit for travelers to China. The giant metropolis is home to China’s Forbidden City, Great Wall, Temple of Heaven, Summer Palace, Olympic Park, among many other attractions. Also, the food found in Beijing is a mix of the best foods originating from all over China.  Beijing is called ‘the cream of the crop’ studying Chinese and is in fact the national standard. However, while many would agree that Beijing is a great place to visit, many also agree that it’s not such a great place to stay long-term. The poor air quality, crowded transportation, and high cost of living make it hard to choose Beijing over China’s more forbearing cities.

Study in a Foreign Bubble

Shanghai is by far the most international city in mainland China. Rarely is there a food or commodity from your home country that can’t be found in Shanghai. The Chinese foods native to this region are also generally quite popular among foreigners. Yet, though internationals live quite comfortably here, many report the tendency to get stuck in a “foreign bubble.” It’s easy to end up surrounding yourself with Western culture and forget the goal of studying Chinese. It certainly isn’t the best place to immerse yourself in traditional Chinese culture.

Some parts of Shanghai can be quite crowded, and while the air quality is usually better than Beijing’s, it’s still far from perfect. Also, be aware that Shanghai’s cost of living is often known to be the highest in all of mainland China.

Study Close to the City, Closer to Nature

Hangzhou is located near Shanghai. It has a tranquil beauty to it and is slightly less crowded. Lakes and parks can be found around the city that give it a slightly more relaxing feel. Even so, it’s still a large city and shares Shanghai’s high cost of living and giant population. If you’re looking to learn Chinese in China, you might enjoy this city if you have the budget for it!

Yangshuo is a small town in southern China that lies amidst some of the most beautiful landscape in all of Asia. Two beautiful rivers and thousands of karst mountains surround the town, making it a utopia for photographers and outdoor adventurers. Hiking, rock climbing, rafting, caves, waterfalls, and much more draw people from all over the world to see Yangshuo’s wonders. And though the town is in a rural setting, the abundance of tourists has brought quite a few internationals bars and restaurants to Yangshuo.  With the in and out of foreigners, the small-town locals here are some of the most friendly, which makes living and studying Chinese in Yangshuo easy and immersive.

Aside from the peak tourist times, such as July and the October national holiday, Yangshuo is one of the least crowded and most affordable destinations in China, and also boasts some of the cleanest air. Rain is common, though!

Learn Chinese in an Ancient City

Xi An is located in mid-northern China and is known for its tourism and food. The famous Terracotta Warrior army makes Xi An the third most toured city in China, behind Beijing and Shanghai. Lots of traditional Chinese culture and ancient history can be found in Xi An. Those seeking to learn Chinese in China may be attracted by this. And since it’s not a mega center for commerce, the cost of living is moderate. However, winters are cold and the air quality is usually quite poor.

A Quiet Place to Study Chinese

Kunming is the largest city in Yunnan province and is best known for its great air quality and weather. Surrounded by rolling hills on all sides, it has a fairly relaxing vibe. However, aside from a couple lakes to visit, Kunming is greatly lacking in fun things to do. There’s also not much variety in food. It makes a great base, though, for those who plan to travel around Yunnan province to destinations such as Dali, Lijiang, Shangri La, and Xi Shuang Ban Na. Kunming’s cost of living is fairly affordable.

Study Chinese by the Beach

Xiamen is a modern, coastal city that generally has great air quality and weather. In recent years China has been intensely investing in the development of Xiamen, making it one of the most modern, cleanest cities in China. And though there aren’t specific attractions or things to do that draw tourists to Xiamen, foreigners who live here usually have few complaints, especially those who love seafood!

Guangzhou is by far the largest and most populated city in China. Like many mega cities in China, it has a river that runs through it and a beautiful, lit-up city skyline at night. Despite the huge population, Guangzhou has a more spacious, relaxed feel than Beijing. The weather and air quality are also quite nice. These factors make Guangzhou a very livable city, but attractions, scenery, and fun activities are very lacking. The food local to Guangzhou is generally quite bland but healthier. The cost of living is fairly high in most parts of Guangzhou, but the outer districts are affordable. Most people here can speak Mandarin, but Cantonese is the dominant language in Guangzhou.

Study Chinese in the Silicon Valley of China

Known as the Silicon Valley of China, Shenzhen is a newly developed tech hub. It’s also the main port of entry to mainland China from Hong Kong. The relationship with Hong Kong makes Shenzhen full of modernity, money, and foreigners. International commodities are quickly becoming more available here. And though newly developed, Shenzhen’s cost of living already rivals that of Shanghai. This is a great place for Chinese learners who are looking to get into China’s growing world of international business, but it won’t be cheap!

Chengdu is a large city near the center of China known as the home of pandas and spicy food. Both the air and the city are fairly clean. Located in Sichuan, there are exciting places to visit hours from the city. Chengdu itself, however, doesn’t have many major attractions (other than pandas at the zoo). Many foreigners love Chengdu, saying “there’s just something unique about Chengdu, but I can’t quite put my finger on it.” The cost of living is moderate, and, as long as you can handle the spicy food, you might enjoy it. Some, however, choose to stay away because of the earthquakes that are common in this region.

If you’re interested in studying Chinese at a language school in any of these cities, a quick Google search should help you find one.  And if you must decide with your stomach, here is an easy guide on foods by region. However, if you’re curious as to what factors make an excellent Chinese language school, check out our guide on choosing the right school for you. Not all schools and courses are equal!

Best wishes to you as you learn Chinese in China!