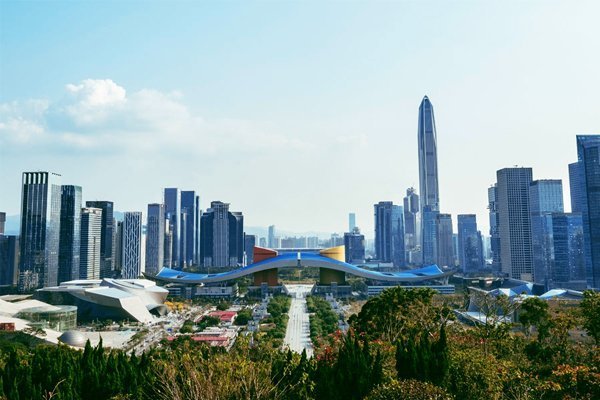 10 Cities in China with the Best Air Quality 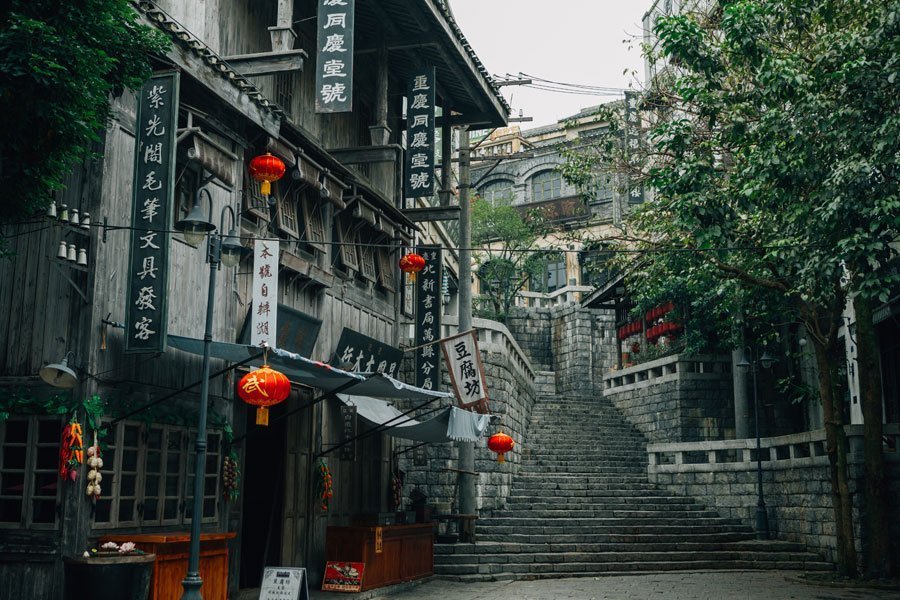 Sitting on the island province of Hainan, Haikou boasts a beautiful living environment. If you like to work and study near the water, Haikou could become your home away from home. Just a few hours drive to the Southern tip of the Island a popular resort and surfing destination, Sanya, awaits (Sanya also has a high ranking AQI level). While Haikou is quite touristy and a little more expensive than other mainland China cities, the air quality and volcano park (yes – that’s real!) make up for it.

Photo by Denny Ryanto on Unsplash 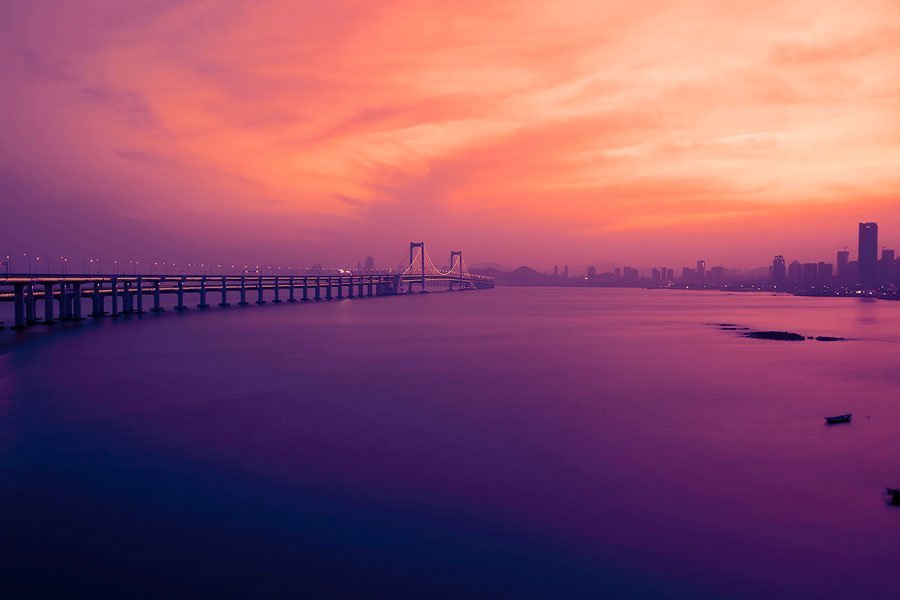 If you are looking for a city in Northern China, Dalian can easily become your new home. A beautiful port-city, Dalian is industrialized and clean. It also offers stupendous air quality for a city of its size in northern China. If you love the beach and playing football (the football community in Dalian is huge) then this city will suit you. While it has a larger international community, Dalian is only a 1.5 hour flight from Beijing and 1 hour flight from Seoul, South Korea.

Photo by Wade Meng on Unsplash 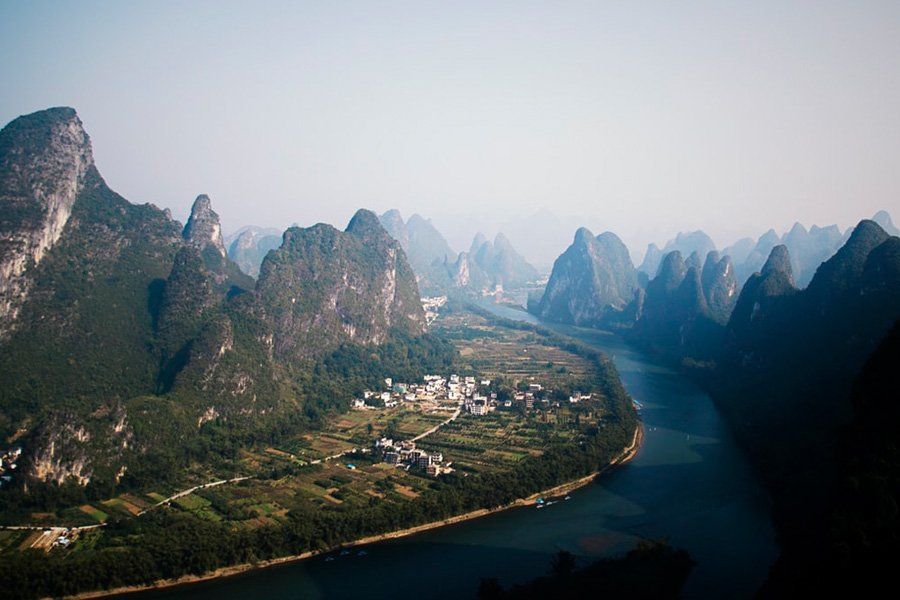 A county within Guilin, Yangshuo is an escape from the crowded cities and home to some of the most beautiful landscapes in China. The karst mountain scenery and rivers make Yangshuo the home for adventurous foreigners and locals who like to mountain bike, hike, rock climb, and even take a bamboo raft down the river. Yangshuo offers more than just outdoor adventure – learning opportunities are immense from studying Mandarin and/or teaching English at Omeida Chinese Academy to taking refuge at the Tai Chi Academy to learn from local masters.

Photo by Daniel Höhe on Unsplash 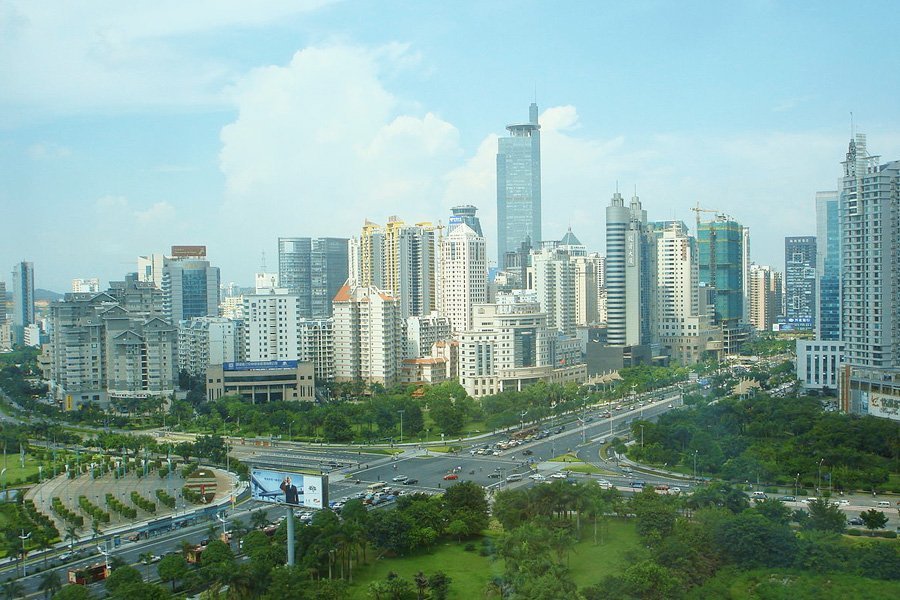 Looking for a beautiful city to live in that is less touristy? Just a 4 hour drive southwest of Guilin, Nanning, the capital of Guangxi province is calling. Nanning is known as China’s “green city” being surrounded with lush tropical trees and 80 greenbelt areas makes it one of the best cities in China to live in for air quality. Nanning frequents less tourists than other cities – so if you are looking to integrate in a Chinese speaking city that is still friendly for foreigners, Nanning is a great option to consider. City life is much less overwhelming than China’s mega cities but still hosts a large population of 7 million. 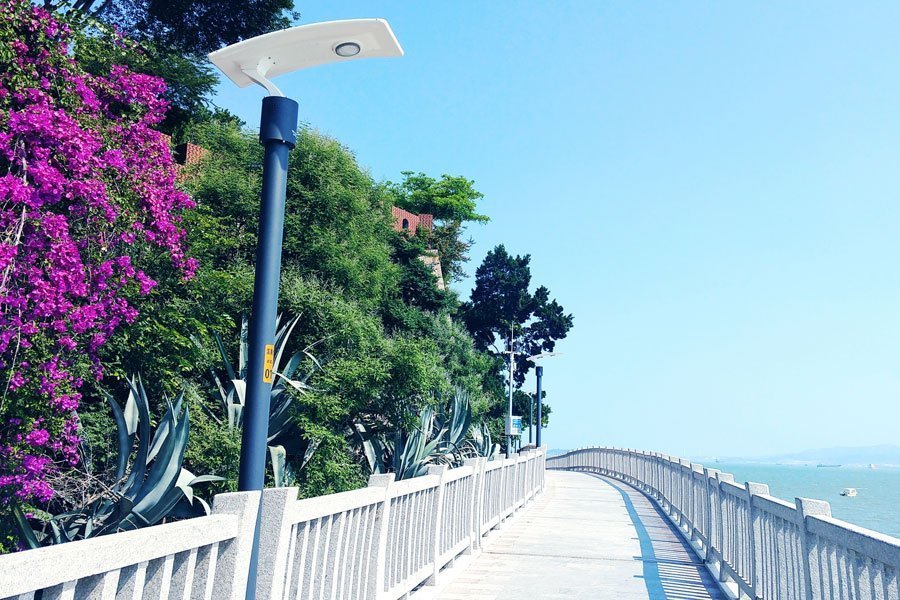 Finding an international, clean, large, coastal city in China with good air quality is hard to find – but Xiamen has it all. Xiamen rests on the coast and was one of the four special economic zones that allowed foreign business. Because of this, Xiamen has a larger international scene, which means you’ll find many types of cuisine and foreigners in its midst. Notably, Xiamen is consistently ranked as one of China’s cleanest cities and Xiamen island hosts many beaches to enjoy on hot days.

Photo by 炫铭 on Unsplash 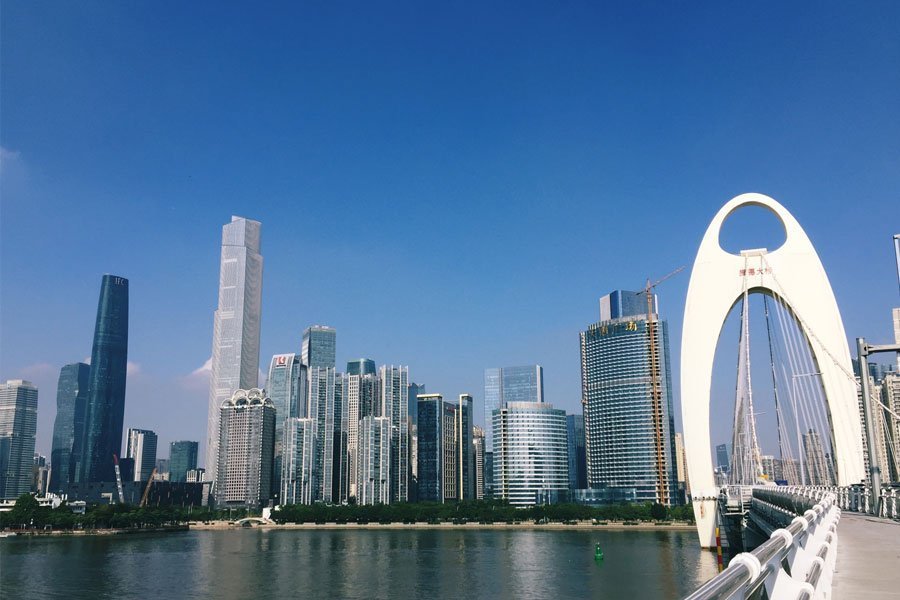 If China’s megacities are more your style, Guangzhou is an enticing option for all foreigners. The capital of Guangdong province, Guangzhou’s population of 13 million hosts many foreigners and ultimately business and study opportunities that come with it. Guangzhou is an excellent hub if you are interested in travel with the cities several rail stations. Here, weekend travelers are always connected to their next destination, especially when heading to Shenzhen, Macao, and Hong Kong.

Photo by Lycheeart on Unsplash 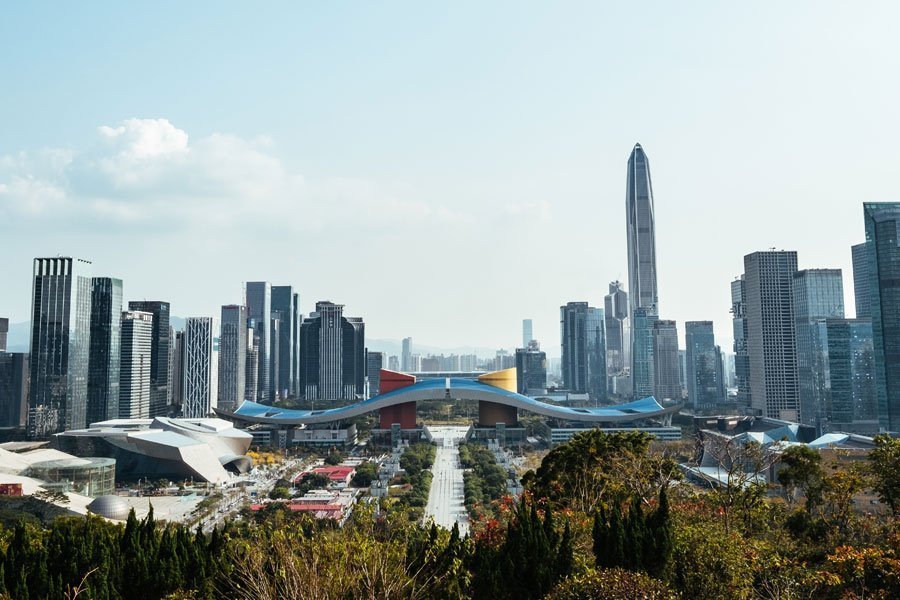 ‘New China’ is a common description of Shenzhen – one of China’s most international cities. A city built for and around immigration, Shenzhen hosts expats for business opportunities from all corners of the globe. Cultural diversity and Chinese tradition will meet you at every corner in this major city, which also happens to be surrounded by beaches and is a short train ride to Hong Kong and Guangzhou. Whatever you are looking for in Shenzhen, you are sure to find it.

Photo by Robert Bye on Unsplash 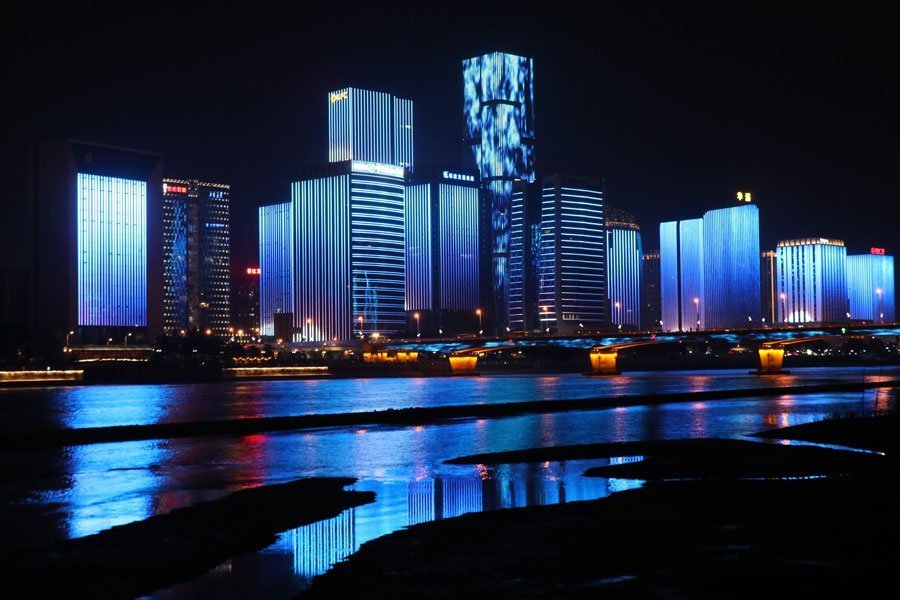 Located between Xiamen, Shanghai, and across the straight of Taiwan you will find the capital of Fujian province, Fuzhou. Beyond its impeccable location, Fuzhou offers sea and mountain views alongside the plentiful banyan trees making it a beautiful place to explore. Fuzhou is a modern city lined with sky-rises yet hosts a hidden history and home to many historical sites. City lovers and historians will find plenty to do here from shopping, business, strolling through 1,700-year-old West Lake Park, and visiting many museums and landmarks. 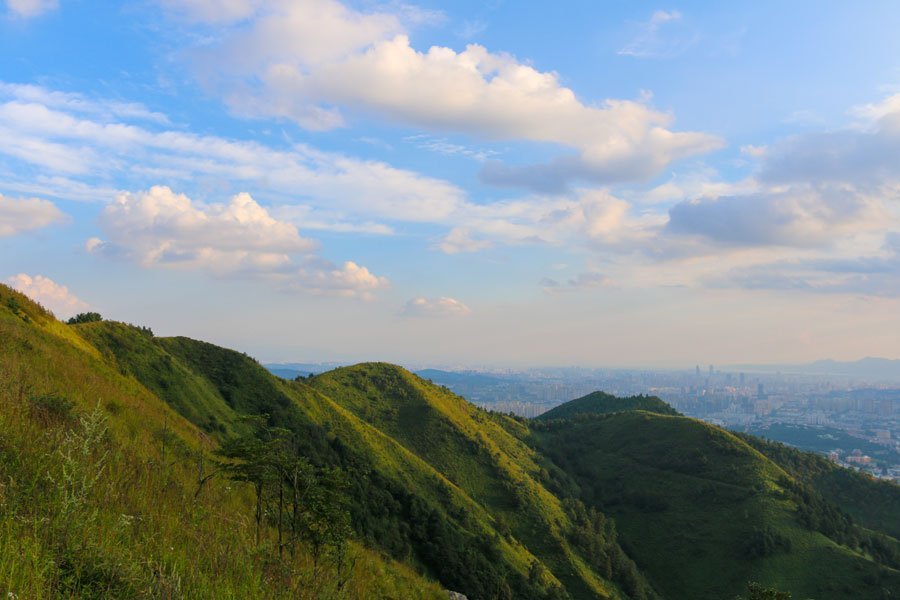 If sub-tropical weather is too hot, imagine yourself in the capital of the Yunnan province and the city of eternal spring, Kunming. With consistently mild temperatures, Kunming is beautiful all year long. If studying is what you are looking for, Kunming hosts a large student population thanks to the 12 local universities. If you are interested in travelling throughout Southeast Asia, Kunming is a nearby gateway to Vietnam, Laos, and Thailand.

Photo by Cexin Ding on Unsplash 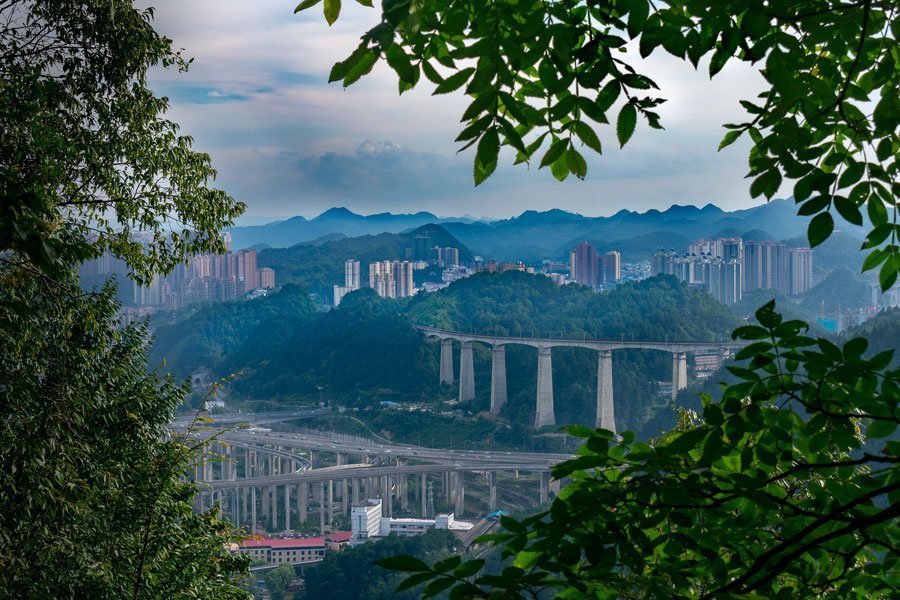 If you are scoping out a smaller city, Guiyang is home to 3 million inhabitants and a great place for foreigners to move if looking to integrate into Chinese culture (while still being able to find an expat community). One of China’s first “forest cities,” you will find Guiyang surrounded by trees, parks, and good air quality. For weekend outings, Guiyang is a central link to major tourist cities like Chongqing (2 hours by high-speed rail) and Chengdu (4 hours by high speed rail). Guiyang is also a 2-hour train ride from Guilin if you want to escape to the mountains. Guiyang is perfect to settle in during the week and travel during the weekend – just make sure to check the daily AQI’s of cities you head to (Chengdu and Chongqing both had AQI levels that registered them as unhealthy for sensitive groups in 2018).

Image by lin2015 from Pixabay

Wherever you choose to work in China, study in China, or travel, you’ll find plenty of opportunities to enjoy your time in the county. However, wherever you make your new home or whenever you take a weekend trip, make sure to check the daily AQI levels to stay as healthy as you can be while abroad. Keep on reading to learn more about air pollution in China and what that means for you.

Air Pollution is made up of gases and particulate matter – these pollutants affect the quality of air – and ultimately one’s health if the quality is low. Some pollutants are more harmful than others. Levels of PM2.5 should be monitored – these are tiny particulate matter that is small enough to enter one’s bloodstream and affect bodily function. Cities that have high levels of PM2.5 (more common in Northern China) host some of the worst air.

Air pollution is dangerous to public health, because of this the Chinese government is taking the issue seriously.  In 2013, the People’s Republic of China enacted the Airborne Pollution Prevention and Control Action Plan (2013-2017). The several targets of the plan included a 10% reduction in particulate matter for all cities (above county-level). Alongside cutting iron and steel-making capacity and reduction of coal usage in energy.

By 2017, these measures worked with PM2.5 dropping in some regions significantly like it did in the Pearl Delta River at 31.9%. However, even with this improvement, many cities in China still don’t meet the standard for healthy air quality. In 2017, more measures adopted meant central and local governments investing billions. From converting heating systems from coal to clean energy and stricter enforcement of environmental laws. Beijing has been the city most watched when it comes to “China’s fight for blue skies”. The capital has seen major decreases in pollution because of this. With these improvements and further action,  the cities with the best air quality could change within a few years.