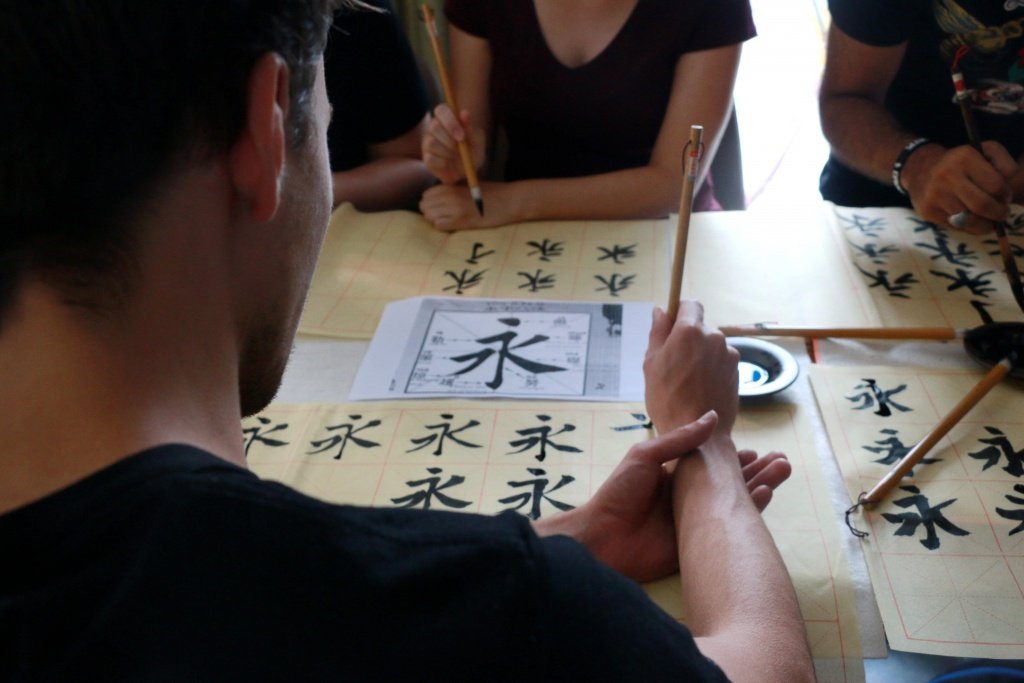 What is Chinese Calligraphy?

Teacher Zhuge gave us a vivid lesson about how to do Chinese calligraphy. Since calligraphy is considered supreme among the visual arts in China, it sets the standard by which Chinese painting is judged. Indeed, the two arts are closely related.

Paper is one of the four major Chinese inventions. Xuan county of Anhui province produces the most famous type of paper, known as ‘Xuan paper’. Xuan paper can express the elegance of ink. Papers for the use of calligraphy differ in their strength of ink absorption. The calligrapher will select the type of paper based on the ideas they wish to present.

Chinese brushes are made of animal hair being soft and flexible. One special feature is the point at the tip of the brush. By controlling the pressing or raising of the brush, the calligrapher delivers a feeling of brush thickness or fineness, of feather-weight or of heavy-strength.

Traditional ingredients for the making of ink originate from burned palm twigs or the smoke from tar. For the sake of convenience, modern people gradually turned to ink chemically produced for their writing. However, the process of ink grinding requires time and patience. Therefore, this process is able to make people stay calm and enter a state of mind suitable for calligraphy.This is a necessary step to go through to study and practice calligraphy.

Miriam is doing calligraphy for the first time, and Fran on the right is telling people how beautiful her handwriting is. Calligraphy is all about patient and practice. The more you write, the more you will settle your thoughts and find inner calmness.

‘永’ means forever and long lasting, but also has simple structure for beginners, so it is a perfect choice to practice in first lesson.

Confucius regarded calligraphy as one of the six arts that any real gentlemen should possess. Every character in Chinese requires balance. In fact, a single unbalanced stroke can make an entire character look unstable, as if it would fall easily if you were to push it gently with your hand. Each character should stand upright so that it has poise.

If you practice every day, you start to notice something else about your characters. They start to gain strength. As you get better at taming your brush, you can channel energy so that the soft tip of hair becomes like a sword and can carve sharp lines into the paper. It is said that a great master can literally carve characters with his brush into a wood table!

Calligraphy is, in fact, a type of kung fu. It uses the same principles. The practitioner channels energy in the same way. So, with practice and concentration, you can achieve balance, flexibility, focus, awareness, a sense of harmony and strength through simple actions.

How to Choose a Chinese Language School in China – A Guide